How To Hook Up Three Wire Hook Up Light Switch?

Anonymous answered
A 3-way switch light is a very common system in all homes and they are used to operate 2 switches for one specific light. Although there are several methods for wiring a 3-way switch, there is one which is the most common of all.

Join the white wire from the power supply to the white wire in the 3 wire cable going towards the other switch, in the first box. Then connect the black wire on the screw of the 3 way switch. The two remaining screws on the switch are connected with the red and black conductors from the number 14/3 cable. 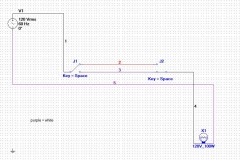 Here is some diagrams that might help you look on the right side of the page and you will find a link for a 3-way switch.

timothy cantwell answered
I have 2 black wires and one white wire in my switch box. I want to install a new 3-way switch. The switch has 2 screws on one side and 1 on the other with a ground screw at the top. I do not have a ground wire in the switch box to hook up to the switch. Is this going to hurt anything in the future not having the switch grounded. Or is the switch grounded since it's bolted to the box in the wall??? I installed the switch and I'm worried because the top of the switch is lighted when in the off position. Is this right? Did I even hook it up properly. It does work for both switches I just don't know if there are going to be any problems later

Anonymous answered
Ok,,,does this make sense, you have three wires, a Black, white a red wire and a bare copper wire Right? Then you should have a 3 terminal switch with a ground! The black is the hot (power) , the white is the neutral, the red is the traveler and a bare copper wire (ground). This is known as a three way switch used to control 1 light from two places, Attach the hot wire to the common terminal( which is a different color), attach the white wire to the side of the terminal that has only 1 screw on that side, attach the red wire on the same side as the hot wire attach , the ground to the green terminal... Should work!